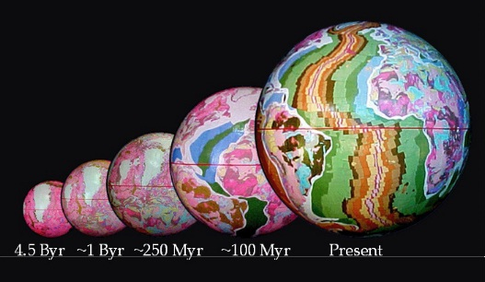 Being the tail end of the school holidays here in Australia we have been looking after our 6 year old granddaughter while mum and dad go to work to etc., etc. One of the joys of being a retired grandparent, of course, is that you get to/have to  sit through/endure the kiddie shows on TV. I’m sitting there mesmerised by the antics of various animated dinosaurs and suddenly a real-time propagating crack appears in the landscape and climate changes dramatically for the worse. I’m left sitting there waiting for the inevitable meteor impact to happen and sure enough here it comes. All the while I’m saying to myself this never happened, but these kids don’t know any better.

So here I am left thinking, what are the implications of us even contemplating changing this comforting setup that our graphic designers and media buffs have instilled in our kids  – along with the rest of us with those well-meaning but totally wrong documentaries masquerading as truth? Here we are debating amongst ourselves while attempting to change the course of science – for better or worse, but think of all those graphic designers and media buffs, along with their thousands of documentaries, animated kiddie shows and movies already in existence that have to be scrapped. Nobody will be happy with that now, will they?

I’m being a bit facetious of course, but, unlike our predecessors [Wegener, Einstein, Copernicus, Darwin, etc.] who didn’t have the luxury/inconvenience of modern media,  we are facing an extremely difficult challenge. In order to convince science that they have got it all wrong we also have to change the mindset of an entire generation brought up believing that everything they see on TV must be true. Maybe this would be a viable avenue, but there would be an awful long time between the adds where the old and new technologies would overlap – breading copious amounts of chaos lasting for generations – analogous to trying to convince Americans that the metric system really is better than their medieval system of measurement.

I don’t really have any answers to this dilemma, only the commitment that Expansion Tectonics is right and plate tectonics is wrong. I suppose, to a graphic designer or media buff, an Earth steadily increasing its radius over time giving rise to passive rupture and breakup of prior supercontinents, with the odd extinction event thrown in as the various seas and oceans merge, would be plain boring compared with the drama of propagating cracks, climate change, and meteoric impact events that their overly active minds have instilled in us all.

So where to go from here? Sure, a viable explanation for increase in Earth mass would be a very good starting point, visually accurate and impressive animations would be fantastic, unity in our ranks would hold us in good stead, but to entice all graphic designers and media buffs to suddenly, i.e. mid-production, stop what they are doing and start thinking expansion is a big ask. What’s in it for them? By the way, it is not the academics that pay for the animations and documentaries, they only advise when necessary, and motivate the fertile imaginations of our graphic designers and media buffs.

I think we have enough  science behind us to make a stance without getting bogged down in the minor detail. I think maybe we need to encourage the likes of David de Hilster, for instance, to advise us on how to get our message across via the big screen and/or convention, or even the likes of Jeff Ogrisseg on how to approach the print media, and anyone else out there who is willing to advise, guide, and encourage us in our quest. I have stopped trying to do this alone. What we really need is expertise in the fields of promotion in order get our message across to to the public in order to maximise change. All else will then fall in place – hopefully.